The Bipsync Research Management System is now on release 141. This release contains a new AutoTagging feature that’s sure to interest users with email-driven workflows, plus several other fixes and improvements.

We’re very excited to announce the new Bipsync AutoTagging feature, which can be applied to content emailed into the system.

It works like this: when an email is sent to Bipsync, we apply a mix of heuristic algorithms to automatically classify research content. The system checks the subject line and email body for any known entities – these could be the names or tickers of companies (e.g. Apple or AAPL), or the name of a GICS industry (e.g. Automobiles), or the name of a geographic location (e.g. Brazil) or any other type of entity your firm uses – and then processes these matches to determine which are relevant, before associating them with the note. 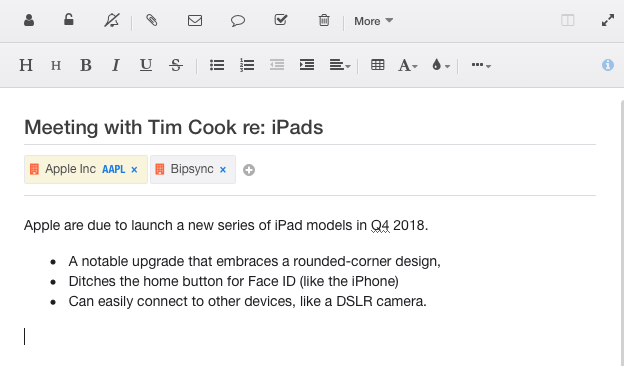 The Apple tag in this example was identified by the AutoTagger.

Relevance is determined according to several factors, some of which are determined by Bipsync, and some by the fund or user. Bipsync considers elements such as whether the text is capitalized, and the location and frequency of each matched term. It also limits potential matches to tags that have been previously associated with research within the fund, to reduce the chances of a false positive match.

With this in mind, we also recognized the value of exposing configuration options to users. With this feature we also enable the user to influence the matching process according to their preferences by adding “matching rules” to entities. Users are also able to influence the matching process by adding “matching rules” to entities. In the example below, the Apple entity has been configured for AutoTagging: 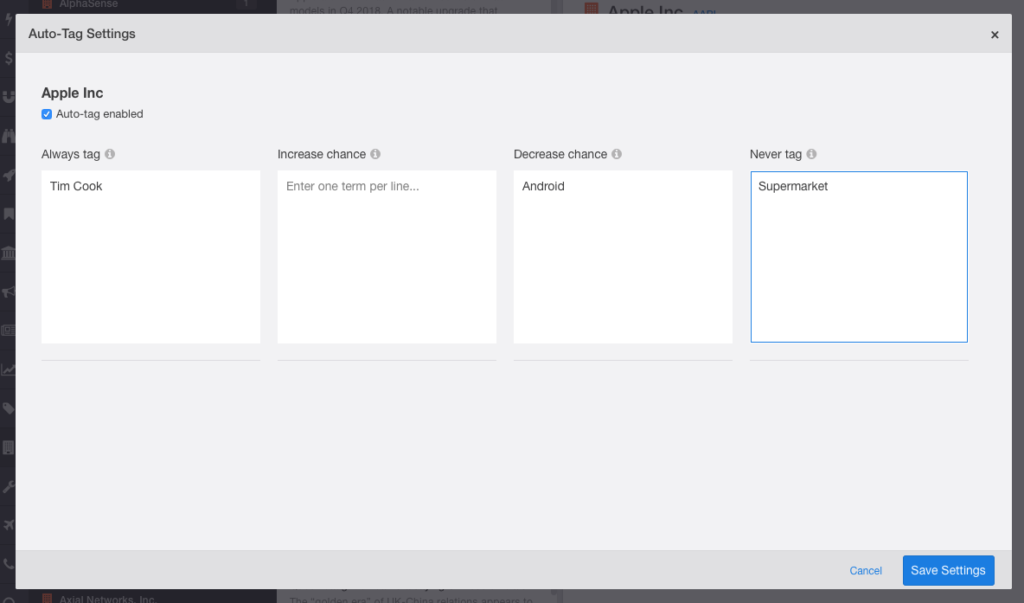 Configuring the Apple entity for AutoTagging.

The configuration will have the following effect:

Through this kind of configuration, users are able to set up the AutoTagger with the information it needs to accurately identify tags within their content. Each entity can also be prevented from ever being matched. Our opinion is “no tag is better than a bad tag”, so we’ve gone to great lengths to make the feature as reliable as possible.

We are expanding this feature across the Bipsync platform over the next few months; users will be able to take advantage of AutoTagging in other scenarios, such as when typing notes in one of our apps, or when clipping a web page.

AutoTagging is available now on an on-demand basis, ahead of a full roll-out next year. If you’d like to enable AutoTagging for your installation, please let us know so we can arrange it.